Had it been a normal year , I wouldn't have written this. But these are extraordinary times that we live in. The pandemic has become something of a terrible dream we are all learning to live with. And I am sure each one of us will have a pandemic story to tell.

Given that and the fact that we sent Sibi to BYU last year and he has to live through all these times growing up probably in record time to manage himself and his affairs. That is for later. Let me tell the story of how we learned to live in these tough times.

The first year in college started off as always. Sibi was very enthusiastic about getting started and was keen to explore the various facets of life in front of him. He took up a job with the dining services , cleaning dishes 2 hours a day on a flexible schedule. The reason I write about it - rather than the classes he took is primarily because I take pride in the fact that he was able to do that and manage his affairs very well. And that he got a practical understanding of the word 'Dignity of labor' by himself.

He had a quiet room mate and settled into a rhythm very fast. If he missed us in any one of those days , he never told us. He used to call in unseemly hours asking a question on this or that , but beyond that he was able to manage everything by himself. He got excellent support from the school - both the friends he made and the professors he studied under helped him in whatever ways necessary.

The semester was rigorous and between the time he was spending on the work and the studies , he was pretty busy all the time. If he felt any pressure , he did not show it. A lot of credit need to be given to the university as well. While he was made to feel welcome, he also made a staggering number of friends ( by his standard anyway! ) in a very short time. I will give a lot of credit to those boys who took him out for movies , the conferences and importantly , the Thanksgiving parties as well. We are happy that he is making friends and memories that will last. 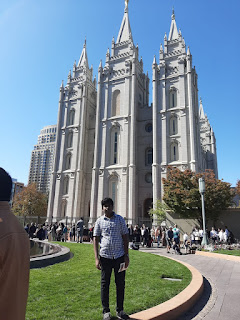 Christmas break was kind of bad as the campus emptied and Sibi was left with only a handful of international students. He did receive a basket full of goodies as Christmas present from 'Anonymous' friends. They made the Christmas and New Year a little more special.

Winter Semester started with the anticipation of his travel back to India in April. Little did we know at that time how things will change.

However, Sibi was able to absorb the cultural shock and be able to respond well to the challenges by learning and behaving well. The only area he struggled and still struggling are the religion classes. That is a completely new thing to him and is doing his best to scrape through.

The pandemic and the shutdown of the campuses started in March and the campus emptied quickly. As the Spring and Summer semesters moved online, the flights got cancelled as well. We wrote to the housing team to extend Sibi's stay and they agreed to do it at a very nominal cost.

Here is why I was happy to have chosen BYU. One, Sibi was made very welcome in the campus and it is difficult to make Sibi do something he doesn't like. Hence, he must find it to his liking to be in the campus. Two, the kids are all very well behaved ( mostly, for college kids , anyway!) and I was thinking of the way I used to be in campus and compared to that , these boys are angels. They celebrated Sibi's birthday , made him gifts for Christmas, took him out for drives to different places and generally , took the effort to be friends with him. That is not easy ;-) . More than that, the university helped with every request to accommodate during the difficult times and also provided financial support on that as well.

The Freshman year which took the least expected turns by the end of it , somehow managed to instill a lot of responsibility in Sibi and he was able to adjust , learn quickly and manage his affairs much better than what I myself would've done. For that , I am grateful.

Had it been a normal year , I wouldn't have written this. But these are extraordinary times that we live in. The pandemic has become som...